Too Bad No One Warned Them… 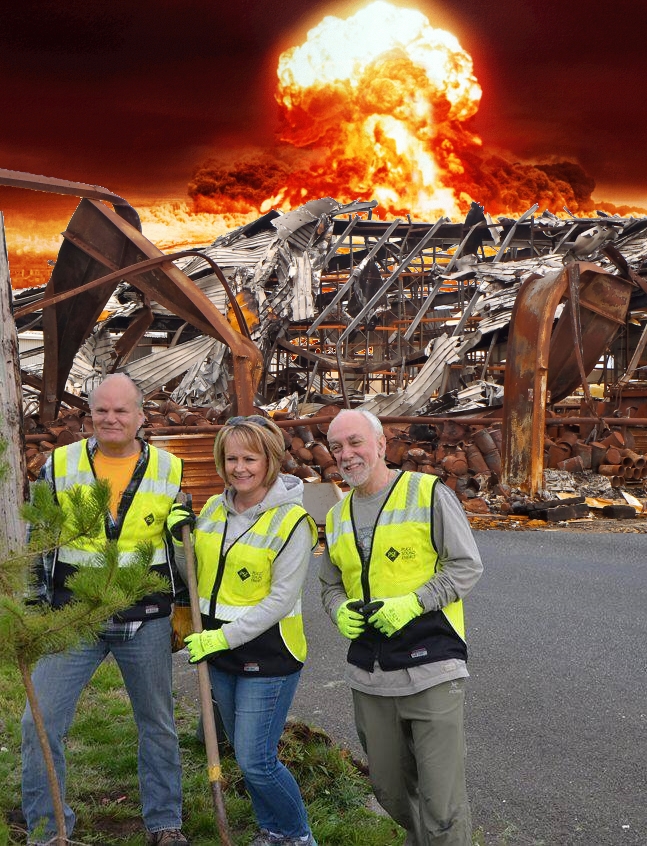 Puyallup has often been plagued by lawsuits. Many would say they have been the result of corrupt or incompetent leadership. As you can see below, as a candidate, District 1 Councilman John Hopkins attempted to be the champion of ending costly litigation.

“I believe the City has squandered money on pointless litigation…”

“Against – Excessive and Expensive Litigation”

With that job apparently “done” he has changed tactics and is now soliciting for new lawsuits.

For months the business community, voters,staff, and even likely from the city’s own attorneys had warned the council, but it seems that he is incapable of taking sound advice.

The following new and costly lawsuit is presented without further comment.

Citizens, city employees, council members and others lined up one after another at the Puyallup City Council meeting on August 16, 2011 to speak their mind about Pierce County’s hair brained idea of taxing the entire county to develop a Goliath communication system that many feel will be wastful and less effective than what we have now in Puyallup. You can go to the following link to view the Pierce County presentation as well as responses from citizens, employees and council members: http://cityofpuyallup.granicus.com/MediaPlayer.php?view_id=2&clip_id=288

Mr. Chris McNutt from District III was unable to attend the meeting, so he submitted the following letter:

Hi,
I’m Chris McNutt from District 3. I wanted to say a few things about the South Sound 911 project. I know that we generally oppose this project. Not because it’s a new tax but because we have already paid for and implemented a compliant system, not to mention the probable loss of service quality and jobs. It seems that we were deliberately left out of it’s planning only to have our inclusion used as a bargaining chip later. We’re not really left with any good options, and the potential loss of investment we’ve already made seems to be a primary focus, but focusing on it also detracts from the real problems of this project. As noted in a Pierce County Council meeting last month, the project will cost around $258 million to build and implement, but this new tax will potentially raise $5-600 million dollars. No matter what the stated intent of the associated tax hike is, the result is that Pierce County will get hundreds of millions of dollars which they can use for anything. The issues of public safety and the inadequate existing LESA system is being used as a tool for bottom line revenue generation. At that same Council meeting it was stated that LESA has over $26 million dollars in yearly funding that would apply to the new system and that the new tax would generate at least an additional $12 million. I’m only a mathematics hobbyist but a system which is supposed to reduce redundancy and cost less money to run should not require an additional $12+ million a year. There are other problems as well. The proposed overlord type dispatch center in the South Sound 911 project hasn’t been implemented outside of a Science Fiction novel because it’s simply a bad idea. Not a single communication issue that is being sited would be solved by this new system, for the simple reason that you don’t call for backup until there is already trouble. The facts are that Pierce County or each relevant individual city have had about a decade to come up with, and implement a new system which is compliant with the national regulations, and now, nearly at the 11th hour, they are making a money grab under the guise of the need for safety using over simplified or opportunistic justifications. To gain compliance they’ll need new systems, and they do need to address the existing safety issues, but handing them a brand new system along with a bonus large enough to have been intended for the CEO of a failing bank, is not an acceptable solution. These penny’s are to be taken from all our pockets to help a specific few, the most notable of which is the Pierce County general fund.

Today at the City-County Building in Tacoma, Judge Larkin ruled in favor of Mike Stanzel in his seemingly everlasting court battle with the City of Puyallup for a water availability letter.

Mr. Stanzel and his wife own Mike ‘N’ Terry’s Outdoor Fun Park in unincorporated Pierce County, north of the city of Puyallup.  They want to add a gameroom to their property for people to rent to have birthday parties or sports team parties.  The game room would include restrooms and a kitchen that require water hookups.  Mr. Stanzel also wants to build separate restroom facilities on the property to make it more convenient for his guests.

If his property is in the county, what does the city have to do with it?  Well, Mr. Stanzel’s property is located within the City’s water service area, meaning anyone wishing to have water must contract it with the city. The city does not want to give Mr. Stanzel water for his game room because he refuses to sign an annexation petition from the city, something the city requires in its’ code.

Judge Larkin had two issues to rule on: 1. Mr. Stanzel refuses to sign the annexation petition so the city says he cannot get water.  Judge Larkin ruled that the city cannot require a property owner to sign an annexation agreement in order to get water.

2. The city will now allow Mr. Stanzel to “T” the water line for the new gaming room off of the existing church building on the site, part of the cities code.  Mr. Stanzel has agreed to add a new line, a new meter, whatever the city requires that is reasonable for getting his letter, so that issue was handled with the judge.

Judge Larkin is setting a date in 2011 to settle attorney’s fees and force the city to give Mr. Stanzel his water availability letter, if they haven’t done so already.

Once he has the letter, he can apply to the county for a building permit to start construction on his new game room.

On Wednesday, November 3, the Planning Commission will be discussing an ordiance that allows cottage housing, essentially a cluster of 1,500 sq. ft. houses built facing a common area.

This ordinance is not being pushed by citizens.  It’s for developers.  These cottage houses will not be for “young couples, empty-nesters, or single professional women,” it’ll be people looking for properties to rent.  They will buy them, and rent them out.

They will become Puyallup’s version of low-income housing.

What are the top two complaints most people have?  1. Traffic/speeding and 2. crime.  This ordinance will most likely have a negative effect on both.

Come to City Hall on Wednesday, November 3 at 7 p.m. to voice your opinion on this ordinance.

Be Prepared for Your Landfill Fee to Go Up

After the council voted down an ordinance to raise our utility rates by a 4-3 vote, they entered into an executive session.

When they emerged, the voted 6-0-1 to enter into a settlement agreement for $2 million with a condo developer who built the River Trail and Addison Greens Apartment complexes.  These apartments were built on a former landfill site that was still emitting methane gas.

Here is the link to the case’s court page.

So, to pay for the $2 million payout the city is going to raise your bi-monthly “sanitation/landfill” charge on your utility bill from $1.25 to $4.35.

The irony of this is two-fold: 1.) The council had just voted down the utility rate increase, but this raises our utilities. 2.) At the District 2 neighborhood meeting Monday night, a resident of the West Hills area that was annexated in 2008 questioned why he is being charged $1.25 for the landfill that he never got to use all those years ago because he didn’t live in the city.  Now, he’s forced to pay $4.35 for that landfill he never got to use.

So, we have two questions: 1.) Who stamped the permits for this project? 2.) Knowing that this was handled internally, why was Foster Pepper attorney Steve DiJuilo hired and how much was he paid?

With that said, DiJuilo has a horrible track record for the city.  We have no idea why they keep hiring this lawyer.  This is the same guy that got beat in the AWC case.