***This post was submitted by Planning Commission member Chris McNutt***

I feel very badly for those who are so upset by this topic and the result. I’ll explain why at the end, but first, I’d like to try and connect some dots for those who want to understand why it all went down like it did.

First, you need to understand the difference between a “quasi-judicial” action and a legislative action.

The definition for “quasi-judicial” is a little complicated and filled with legal terms, but it can more or less be summed up as “how a judge rules.” Which is to say, it’s a legal ruling, not a policy ruling.

A legislative, or policy decision is one where public opinion and representation plays a big role (or at least should play a big role) in the results.

A rezoning application is decided through the quasi-judicial process, not a legislative one.

It is a determination of the validity of the submitted criteria measured against the rules of the application process. In other words, there is a definitive process, a specific set of criteria that everyone is required to fulfill in order to be granted a rezoning of the property they own. Think of it as a series of checkboxes. Is criteria one met? Check. Criteria two? Check. Criteria three? Check.

The sole determination the panel is legally allowed to make is whether or not the criteria is met. Within the fair application of the law, there is no relevant policy discussion surrounding these decisions.

Most cities handle these matters through a Hearing Examiner, which then has an official appeal process. However, it was long ago established that we don’t do it that way in Puyallup. It is instead handled by the city council.

Let’s look at another situation that may seem more familiar.

Let’s say a judge was hearing a case about a robbery. They would accept evidence and make a legal determination based on the existing laws.

Let’s say 600 people sign a petition and many people show up to give their opinions about the guilt or innocence of the defendant. Unless the information is evidence (not opinion), it is inadmissible.

Wanting to hang on to an agricultural heritage is an opinion, not evidence.

Wanting to have a great view on your way to work is an opinion, not evidence.

Believing that warehouses possess a biological ability to breed is an opinion, not evidence.

In fact, being for or against any specific use of that land is an opinion, not evidence.

All of these things would be completely valid in policy or legislative decisions, but have no place in applying the law to an application. None.

I won’t bother going into all my personal opinions as to why this rezoning is a good legislative decision. I feel they are sufficient, but they don’t matter because only evidence would matter in this case, not opinions.

Now we get to the sad part. Councilman John Palmer advocated aggressively for the community to stand up and oppose this choice as though it were a policy decision. That either means that he doesn’t understand his responsibility in these matters as a quasi-judicial body, or he doesn’t care about the law and our rights as citizens.

Let’s assume he didn’t understand the nature of a quasi-judicial proceeding prior to the September 3rd council meeting where it was explained to him, in full view of the public. In that case, perhaps his advocacy up until that point could be excused. He didn’t know. He didn’t understand. (We’ll completely ignore the analog of a judge going out and asking people to testify opinions in a case they are presiding over.)

All actions after that point though are clearly in violation of his responsibility to make impartial decisions to apply the law. On September 3rd, it was explained in detail. He was told. He knew.

If he still didn’t have the capacity to understand his job at that point, or worse, chose to ignore his legal responsibility, the people of District 2 have bigger problems on their hands.

And what is particularly troubling about this is that the recipients of the emails were manipulated into outrage and action to oppose something where opinions have no applicability to the process.

It’s not even like last year when Palmer and Boyle used the same playbook to attack the Parks Department. Those were policy choices, and although they only raised a fuss out of spite and hatred for other councilmembers, at least the opinions people expressed were admissible, if also based on entirely fabricated information.

And really, why wouldn’t we stand up and shout? Our elected official used his official soap box to inform everyone of a tragedy in our town. He begged us to stand up and fight for what is right and for the honor of our heritage. Who among us who cares about Puyallup would not answer that call?

In the end though, what call were we asked to answer? Ignorance or incompetence?

So I feel bad for those manipulated and misled. I feel bad that when they answered the call of an elected official in need, they were lied to and used as a tool to stab emotionally at his personal enemies.

I feel bad that Councilman Palmer abused his position to cry wolf.

I only hope that those of us who care about our city will still be willing to answer a call to action the next time. That is, of course, as long as it’s a legitimate call for help.

Vote for the Common Sense Team 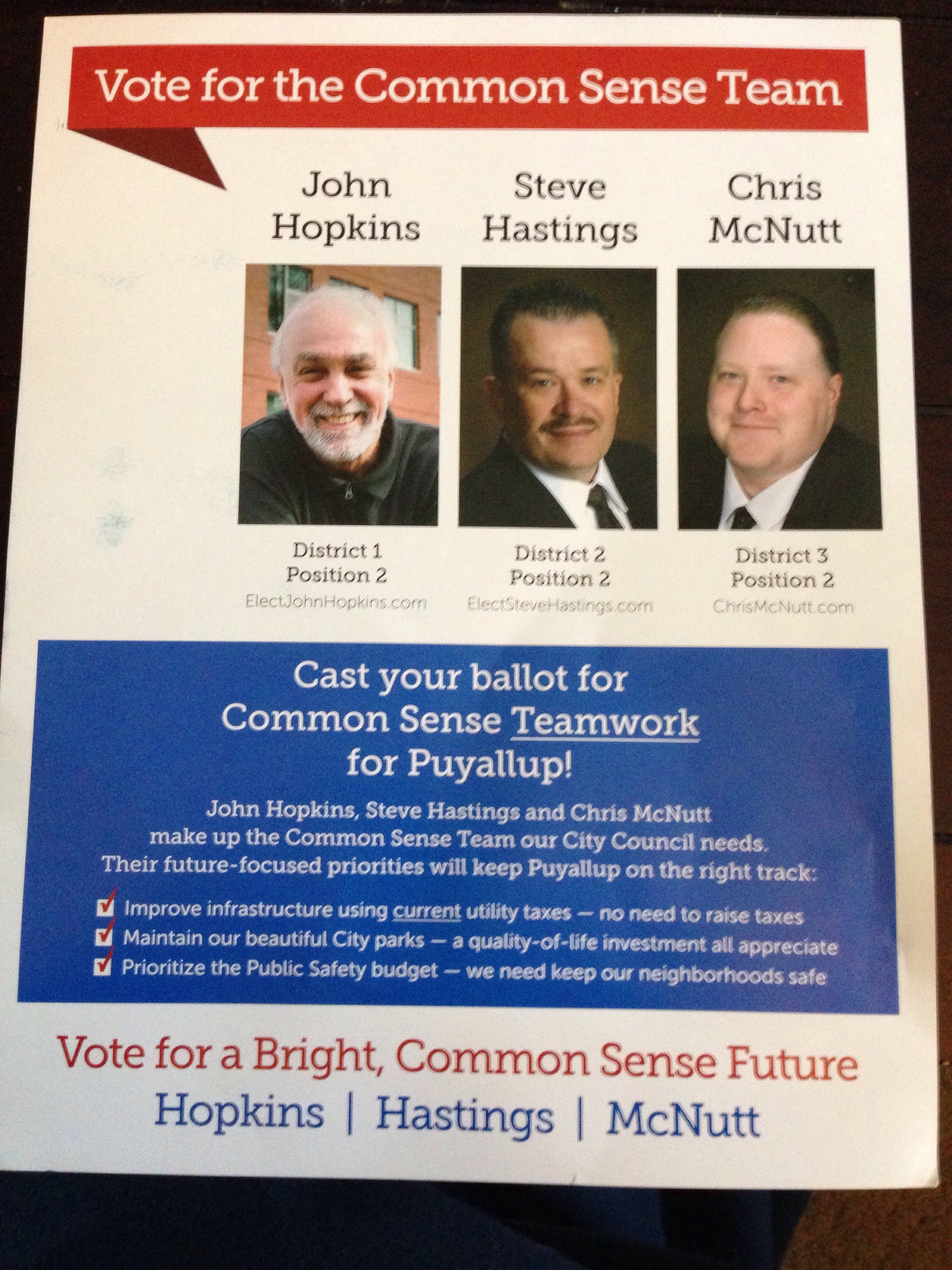 This mailer, that all Puyallup residents should have received yesterday , is from the National Association of Realtors.

This ad was not authorized by any candidate.

Realtors want to sell properties. Things that help sell properties: safe neighborhoods, good streets, and quality parks are all things they know these three can deliver.

Once again, another reason to vote Hopkins, Hastings, and McNutt.

We are less than two weeks away from Election Day, ballots have been mailed, and the final push is on for November 5.

When thinking about how/should we endorse candidates we decided there is nothing we can say that hasn’t already been said. So, we decided instead to take what others have said and showcase the highlights.

One quick note, though. All six of the candidates have touted their emphasis on improving and attracting businesses to Puyallup. Working with local chambers of commerce would seem to be a natural avenue to take. Looking at the Tacoma-Pierce County Voter’s Guide shows only three of the six candidates have responded to their questionnaire. (As of this writing) You can view that guide by clicking here.

Of course, we do not endorse them just because they responded to the chamber. But, we do believe that their taking the time to do so indicates one of their qualifications: follow-through.

As you’ll see in the quotes below, follow-through, trust, and a wealth of life experience and knowledge contribute to their value as council members.

“Since being appointed to the planning commission in 2010, Steve Hastings has initiated the concept of adding an Economic Development Commission. This concept has been sent to staff and council; if adopted, it will result in the creation of a new citizen volunteer group tasked with developing ways to eliminate barriers for new businesses.”
-Diana Martin, TNT

“McNutt has straightforward ideas on traffic, budget and parks. Puyallup needs a councilmember who is clear and direct. I believe this to be McNutt. Speaking with him and his wife as they went door to door a few weeks back strengthened my support.”

“During Hopkins’ last two years on the council, he has proven that he is one of the most prepared and informed council members in decades, always voting based on facts, not emotion.”

“Chris McNutt was an amazing resource as he helped to bridge the gap between concerned community members and city council members, as well as other state officials. Every one of the Shaw Come Together volunteers relied heavily on McNutt’s wisdom, information, contacts and skills.”

As you fill out your ballot look at candidate websites and read their endorsement lists. See where their support comes from. You’ll see on Hopkins, Hastings, and McNutt’s lists numerous long-time Puyallup residents who have volunteered their time to improve our community. They deserve your vote on November 5.

On October 14 from 6-8 PM the League of Women Voters will be hosting a candidate forum for Puyallup City Council candidates.

The forum will be held at the Puyallup Public Library.

In years past, attendees can submit questions for the candidates to answer.

Please consider attending as this will be a great opportunity to hear from the candidates on a variety of issues.

The Tacoma-Pierce County Association of Realtors, which has represented realtors all over Pierce County for over 100 years, has endorsed three city council candidates for the November election.

We believe the association was able to view Mr. Hopkins’ work on the City Council and Mr. Hasting’s and Mr. McNutt’s work on the Planning Commission as demonstrating that they have the vision required to keep moving our city forward.

Each of those three candidates has already complied a strong list of endorsements and this just adds to that list.